The Fed cut the interest rates at the end of July. As the previous easing cycle started in September 2007, many analysts are saying that the current year looks more and more like 2007. We invite you to read our todays article that compares the current year with 2007 and find out what are the implications for the gold market.

The recent Feds interest rate cut has been the first such since December 2008, when the U.S. central bank slashed the federal funds rate to almost zero. However, the Fed started its previous easing cycle in September 2007, when it cut interest rates by 50 basis points amid the severe slump in housing prices. Is this why many analysts are saying that the current year looks more and more like 2007? Are they right? And what would it mean for the gold market? 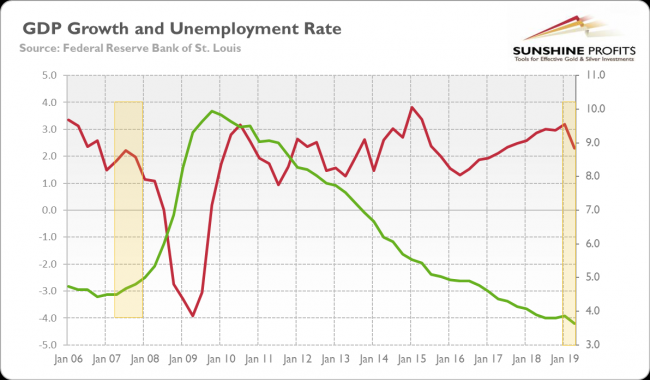 And what about asset prices? Luckily for the economy, the home prices are not declining right now. It might save America from the worst-type recession, where households balance sheets are squeezed. This is bad news for gold, as financial crises accompanied by the housing bust and the resulting debt overhang are the most severe ones. It means that the safe-haven demand for gold might be not as great as it could be. 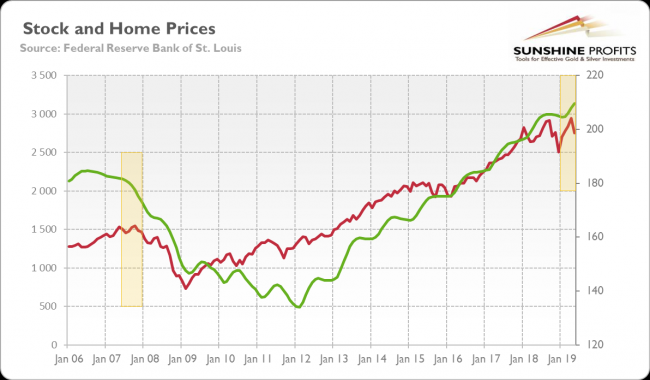 However, the U.S. stock market behaves in a way as it did in the year 2007. Twelve years ago, the S&P 500 Index peaked in October 2019, one month after the Fed cut interest rates. It may still rebound, but it seems that the index has already peaked in July 2019, just a few days before the FOMC meeting.

The yield curve could not be missing in our analysis. Previously, the yield curve inverted in July 2006, more than one year before the Feds interest rate cut and about one and a half year before the start of Great Recession. This year, the spread between long-term and short-term interest rates turned negative in May, and the Fed reacted just two months later. Now, if history is to repeat itself, the sequence should be as follows: the normalization of the yield curve in a few months and then recession in the next few months. 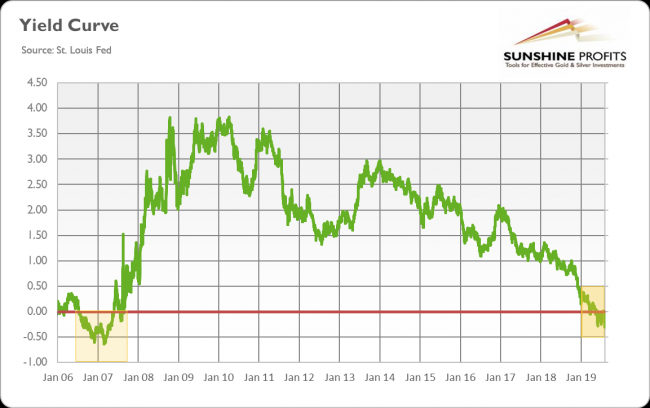 And gold should shine. At least as long as people fear the economic crisis. Please take a look at the chart below, which shows gold prices from 2006 until today. As one can see, the price of gold started to rise in August 2007, just when the Fed cut interest rates. The bullions value has been rising until March 2008, when the U.S. central bank rescued Bear Stearns. The bailout restored, for a while, the confidence in the Fed and the economy, pushing the gold prices down. 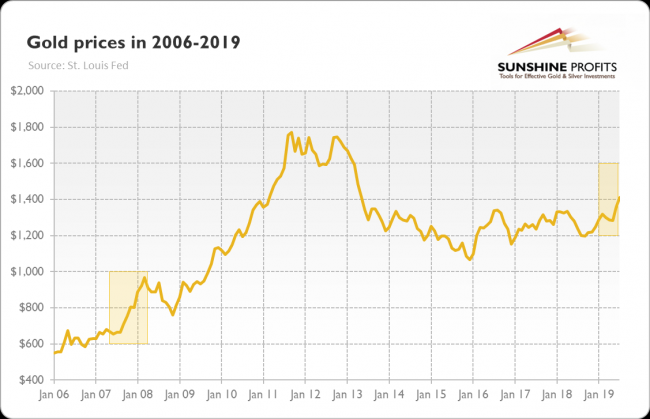 But the yellow metal managed to jump during the first phase of the Feds easing cycle from $665 to $968, or about 46 percent. It means that from the fundamental point of view (not taking into account the technical factors) there is still room for the bull market in gold, as gold gained just 17 percent amid the recent accommodation cycle. Actually, gold may rally even more when the next financial crisis hits. Why? Lets take a look at the chart below. 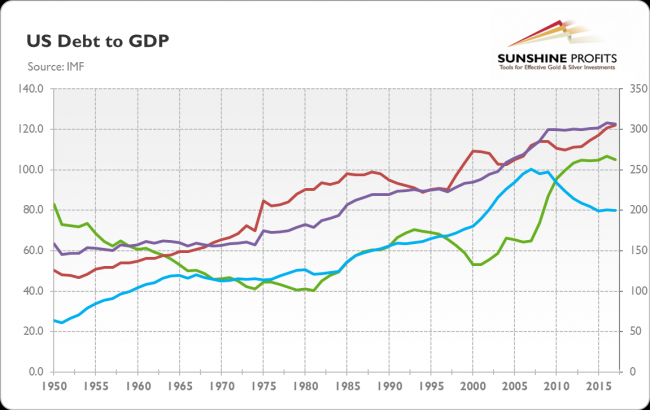 As one can see, the total debt in the U.S. economy has increased from 277 percent of GDP in 2007 to 307 percent in 2017 (and even more today), despite the fact that the household sector deleveraged. It means that the U.S. economy is more fragile than a decade ago and even a mild negative shock could shake the markets. So, even though 2019 looks better than 2007, the next financial crisis could be still ugly and boost gold prices.

If you enjoyed the above analysis and would you like to know more about the fundamentals of the gold market, we invite you to read the September Gold Market Overview report. If youre interested in the detailed price analysis and price projections with targets, we invite you to sign up for our Gold & Silver Trading Alerts. If youre not ready to subscribe yet and are not on our gold mailing list yet, we urge you to sign up. Its free and if you dont like it, you can easily unsubscribe. Sign up today!

All essays, research and information found above represent analyses and opinions of Przemyslaw Radomski, CFA and Sunshine Profits' associates only. As such, it may prove wrong and be a subject to change without notice. Opinions and analyses were based on data available to authors of respective essays at the time of writing. Although the information provided above is based on careful research and sources that are believed to be accurate, Przemyslaw Radomski, CFA and his associates do not guarantee the accuracy or thoroughness of the data or information reported. The opinions published above are neither an offer nor a recommendation to purchase or sell any securities. Mr. Radomski is not a Registered Securities Advisor. By reading Przemyslaw Radomski's, CFA reports you fully agree that he will not be held responsible or liable for any decisions you make regarding any information provided in these reports. Investing, trading and speculation in any financial markets may involve high risk of loss. Przemyslaw Radomski, CFA, Sunshine Profits' employees and affiliates as well as members of their families may have a short or long position in any securities, including those mentioned in any of the reports or essays, and may make additional purchases and/or sales of those securities without notice.